Why I Got My Breast Implants Removed 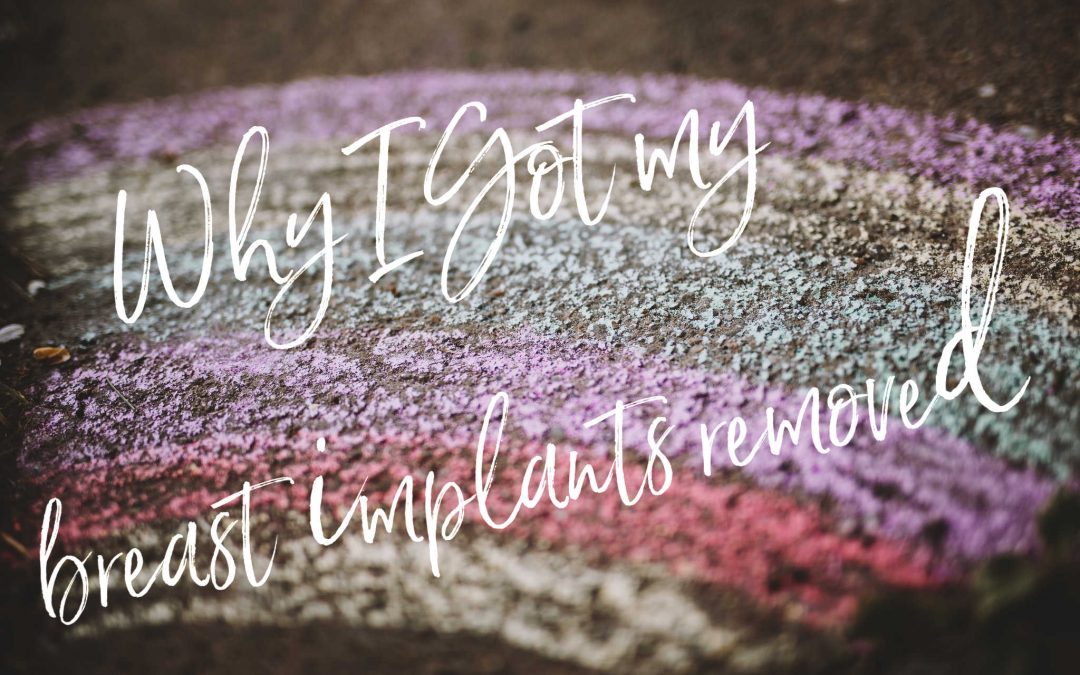 Why I Got My Breast Implants Removed

I never thought that I’d be “one of those” who wanted implants. To be honest, I was happy with my size – pre-kids, that is. Annnd then there were pregnancies and of course breastfeeding. I nursed my first two girls for 15 months each, and after doing so, my breasts showed it. I started to refer to myself as “National Geographic”  – not a proud thing to admit, but it bothered me. I knew that I was slowly heading to “the other side.” I wanted to feel more like myself, to not look in the mirror and despise the stretched-thin bags of love. Little did I know that this was a pivotal moment in my life that would send me to numerous doctors, involve unexplained (and some explained) illnesses, and finally send me back to my starting point. Here’s my story of why I got breast implants and — spoiler alert — why i got my breast implants removed. 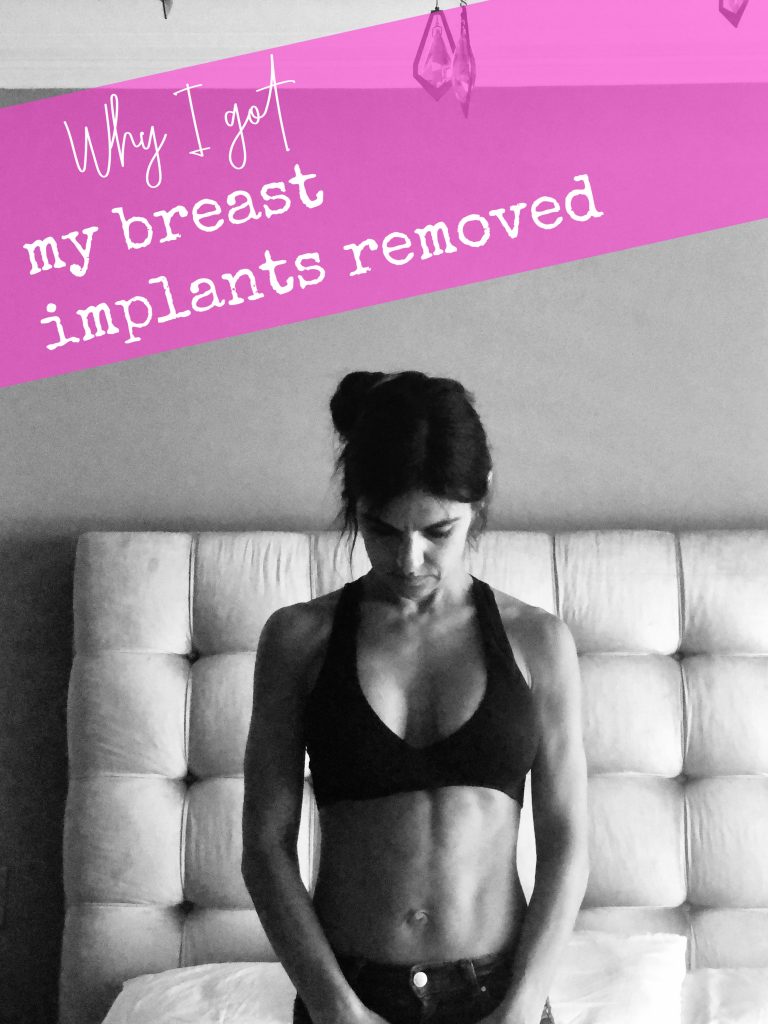 Why I got breast implants

Now this may seem like an obvious one, but remember I started off on Team “No.” I thought it was fake, it was plastic, you know – all those terms that you hear. But after I was stretched thin (literally), my opinion changed. My confidence had slipped, my self-esteem along with it. Sure, I could hide it with the right clothes, but I knew that I already spent so much energy on eating well and exercising. And I knew that this was just something I couldn’t “fix” by doing these things, or anything else it seemed. I wanted to take the plunge, but alas, when I visited the first doctor, he took one look at me and said, “Nope, you need a lift. And I won’t put an implant in without one or it won’t look good.” Because we wanted one more child, they advised me to wait until after having kids. I got the opinion of two other doctors who agreed.
We went on to have our third daughter. Three months after giving birth to her, I had a (non-hormonal) Mirena IUD put in. While bleeding is to be expected, I bled straight for eight weeks with it. My hair turned so oily that it always looked like I had just showered. I couldn’t take it anymore. No matter what hair protocol I tried, the oiliness prevailed, and my OB/GYN thought that my body was reacting to the IUD. I opted to have it taken out. In hindsight, I should have recognized the fact that my body was reacting to a foreign object.
I nursed our third daughter for 14 months, waited three months for my milk to dry up, and then went under the knife. I had a lift and they put in 275 cc silicone implants. Four months later I got pregnant with our surprise baby, baby #4.

To be honest, I never knew that I had any potential symptoms. I actually just assumed that since I had gone through another pregnancy that my body had again changed, causing some of the issues that I started having. After having three girls, we finally got our baby boy with our fourth child. And come hell or high water, I was going to nurse him for over a year, just like I had done with the girls. But things didn’t go that well. My production was nothing like it had been with the girls; he struggled to get what he needed when nursing. I felt guilty, sad, like a failure. How could I not do the same for him that I had done for the others? I had never used formula and I was convinced that I wouldn’t do it with him. But not only was my production low, I also immediately developed Raynaud’s Syndrome – in my nipples. Raynaud’s Syndrome is  a vascular disorder that causes intermittent interruption of blood flow to the extremities. The affected body part (my nipples, in this case) turns white or blue and feels cold and numb. It was incredibly painful and tough to get circulation back. And it was NOT easy to work through. So instead I decided the next best option was to pump. I pumped and supplemented with formula for 15 months. Looking back, I’m sure that I damaged some breast tissue and I’m also not sure how smart this was given that I had implants. 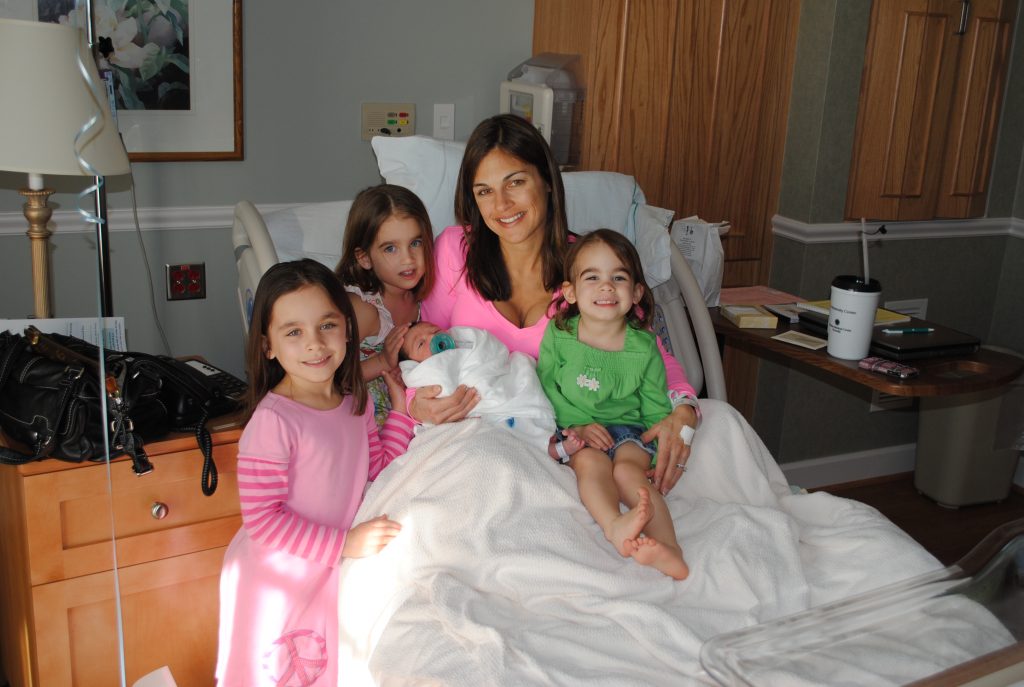 2011 after the birth of our fourth and final child

Below is a list of symptoms that are associated with Breast Implant Illness (BII). It took me two years to admit that I may in fact have BII. During that time, three different friends had directed me to the information out there on Breast Implant Illness. When I finally went through the list, I realized that I had 29 of the symptoms, including the following:

My diagnosis over the past 11 years (during which had breast implants) include: 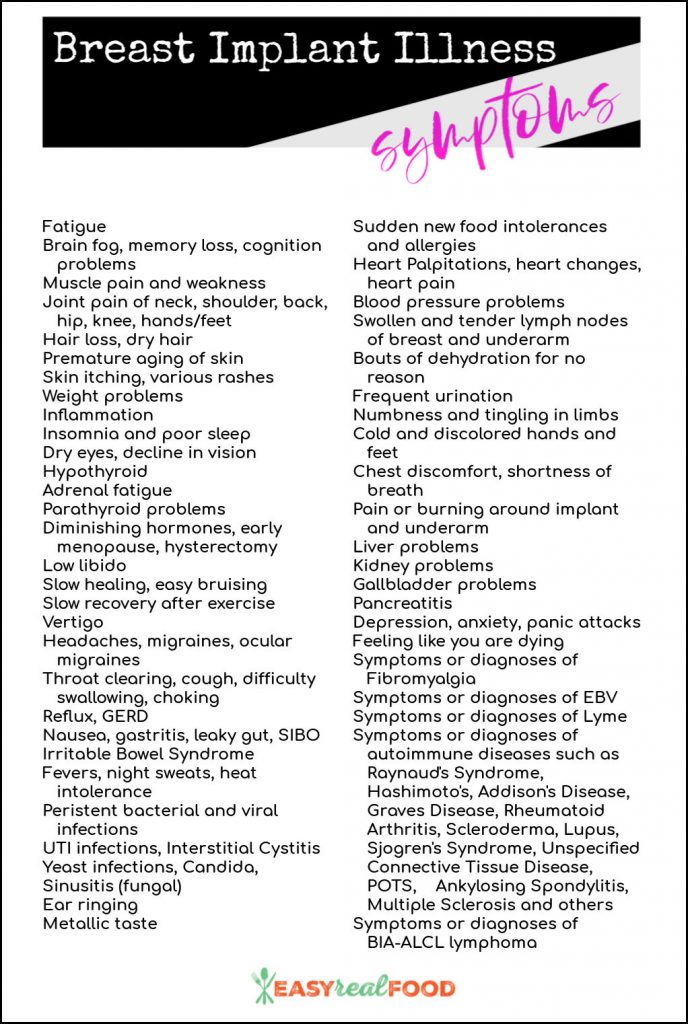 While Breast Implant Illness is not currently recognized as a medical diagnosis, the Food and Drug Administration and other major health authorities have been giving it more attention recently. In May 2019, the FDA released a statement noting that the agency’s officials are “taking steps to better characterize BII and its risk factors, and are considering ways to help to ensure women have all of the information they need to make informed decisions about whether to obtain breast implants or to remove existing breast implants in an effort to reverse systemic symptoms.” In October 2019, the FDA put out a recommendation for manufacturers to include a black box warning on the packaging of implants along with patient information to be included in a booklet that patients receive.

Research that supports the validity of Breast Implant Illness:

Let me first say that I am not a medical expert. Like anyone in my situation would do, I spent two years researching the topic before deciding to pull the trigger. There is information out there on both sides. There are people who will tell you that it’s in your head – but there are thousands and thousands who have had success and felt so much better after having implants removed. This Facebook Group was introduced to me by a few friends over the years … there are other groups particular to different surgeons, but it’s a great place to hear real people share their experiences. That said, here are a few studies that you may want to look into:

Should I get my breast implants removed?

Breast implants don’t last forever. In fact, the FDA states, “The longer you have breast implants, the greater the chances are that you will develop complications, some of which will require more surgery. The life of breast implants varies by person and can’t be predicted. That means everyone with breast implants can face additional surgeries, but no one can predict when. Patients can also request additional surgeries to modify the aesthetic outcome, such as size or shape.”
Medically speaking, there are a few reasons why you may need to replace your implants:
According to the FDA, arsenic, copper, lead, mercury, tin and platinum are found in all Mentor implants (a common breast implant brand). Many other chemicals, heavy metals and synthetic materials are added to implants, and manufacturers often change and add ingredients. It is documented that even if the implants don’t rupture, silicone and heavy metals can leach into the body. Saline implants can grow mold and mildew. Bottom line: all implants, regardless of the type or brand, cause an inflammatory response in the body, as it reacts to a foreign object. Heavy metals and chemicals leach into the body, and the immune system is weakened. This leaves women more susceptible to illness and infection, heavy metal toxicity, oxidative stress, and potential issues with their thyroid and endocrine systems. I experienced this firsthand, when I first developed hypothyroidism and next rheumatoid arthritis.
As of today, no hard data links breast implants to any type of autoimmune disease, even though there has been association shown. This said, no one can prove that the implants are to blame. However, the FDA has released an official statement linking breast implants to an increased risk of a rare form of cancer. The page details that the cancer, known as BIA-ALCL, is a type of lymphoma and that there is an association between the cancer and all implants, regardless of filling, texture, size, etc. 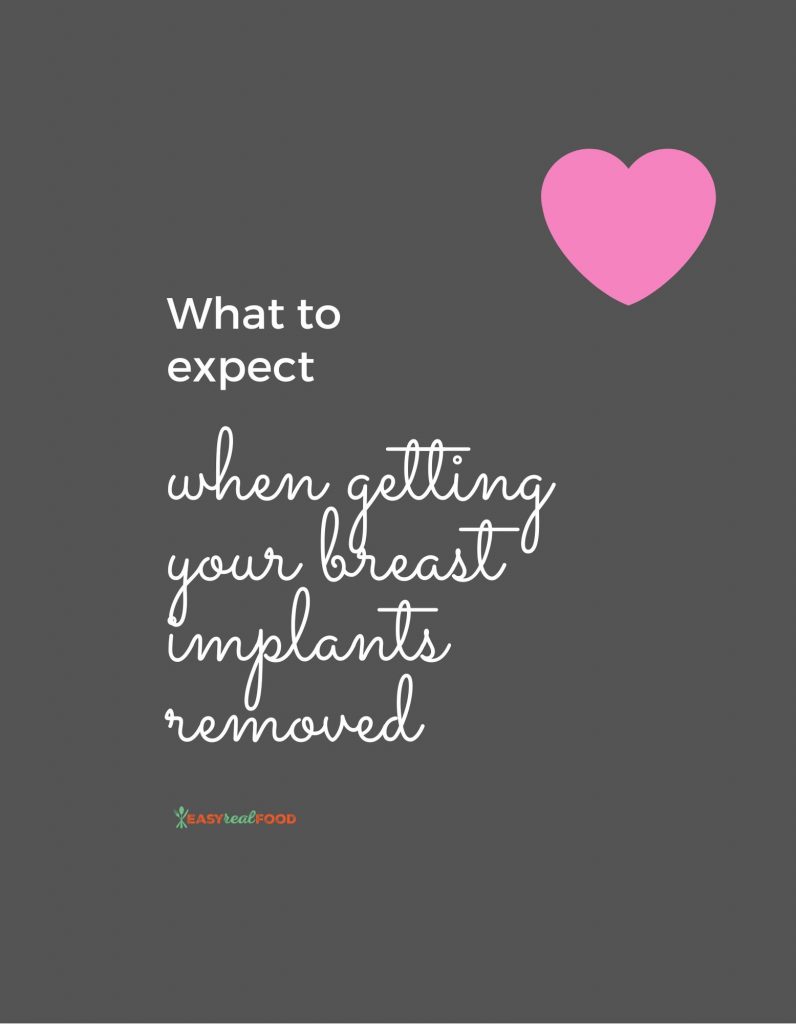 What to expect when getting breast implants removed

Products that helped me during/after explant

Getting your breast implants removed is a very personal decision. I know that at this point, even three weeks out from my surgery, I’m glad that I did it. I’ll post an update in six months to let you know how I’m feeling, but knowing that I have removed them from my body gives me peace. If you have any questions that you’d like to ask me directly, please feel free to reach out. I’d be happy to help and be a sounding board if I can.

All included information is not intended to treat or diagnose. The views expressed are solely mine and should be attributed as such.​ For medical questions, please consult your healthcare provider.