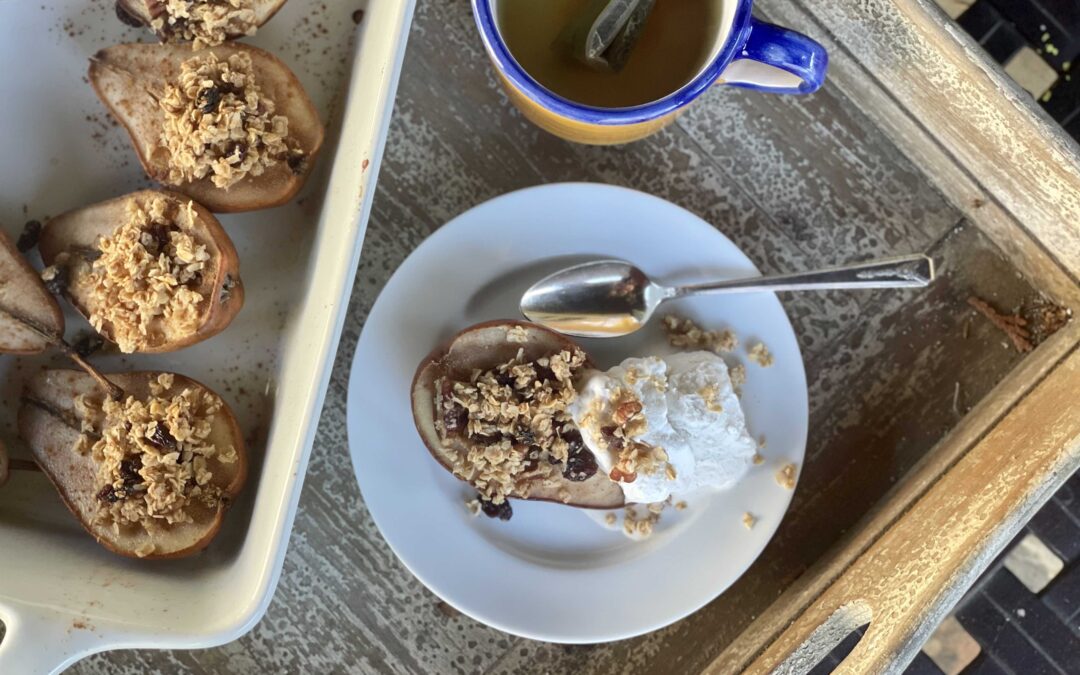 This Gluten Free Baked Pear Recipe is a healthy seasonal dessert, snack or breakfast! Never tried a stuffed baked pear? You’re in for a treat. Oats, cinnamon, raisins and maple syrup are combined and stuffed into a pear that’s heated to perfection. Serve it with or without ice cream. 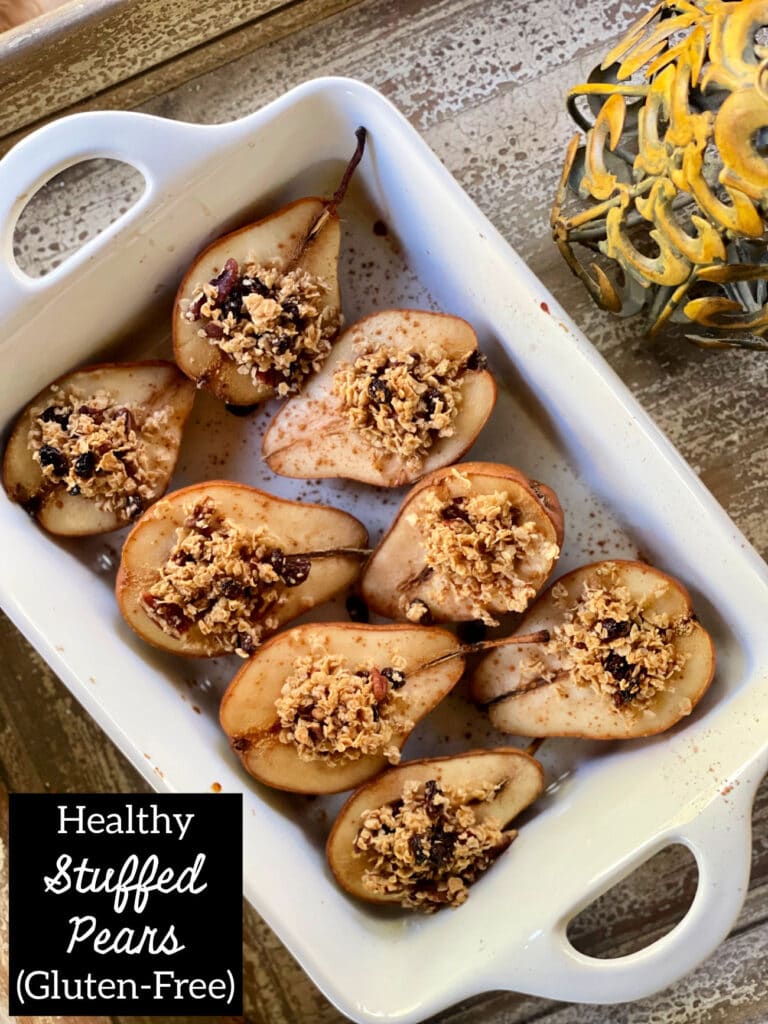 I’m a big fan of fall for all of it’s foods, smells and more. I know I’m not alone! And while I have lots of tried and true fall recipes, I’m always on the hunt for more. This gluten free baked pear recipe came out of a need to use up some super ripe pears and to also make my kids a healthy snack. It’s a fast recipe that incorporates some fiber and fruit. And I was thrilled that they seemed to like it more than I could have expected!

Truth be told: I used my baked apple recipe for inspiration of these. If you like this recipe, you should definitely check that one out, too! 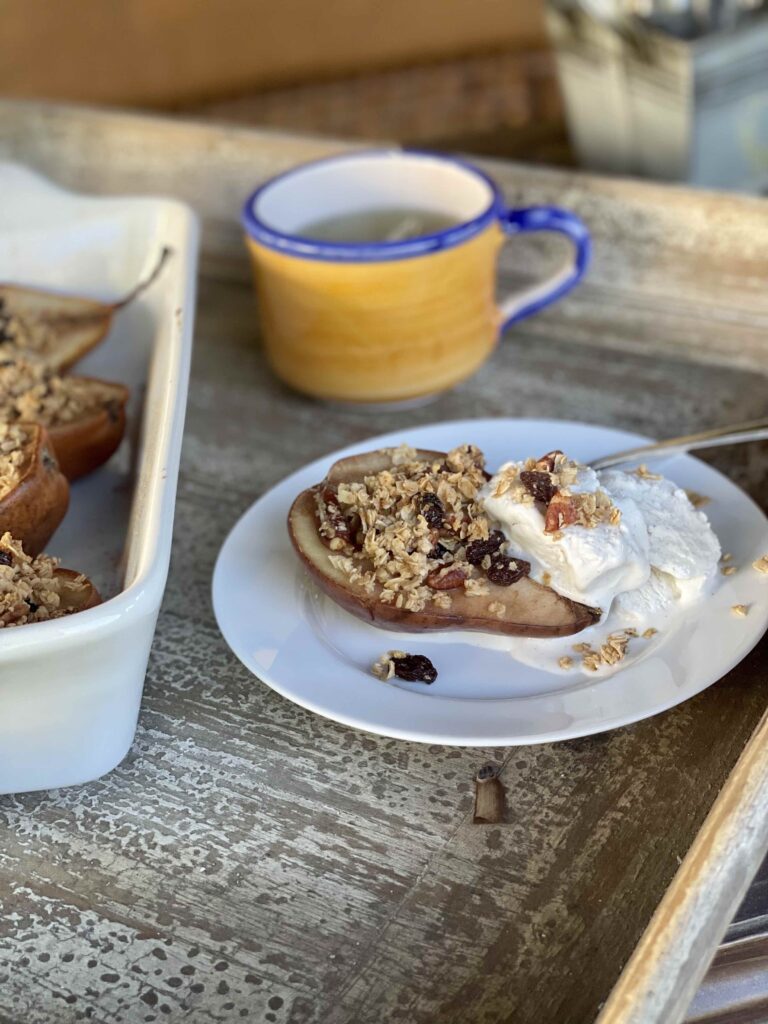 This recipe is a great way to use up ripe pears. To make them, you’ll cut the pears in half and scoop out the seeds. Next, you make a healthy oat filling that will be stuffed into the cut pear. This is a mixture of gluten-free oats, cinnamon, raisins, walnuts and is held together with melted coconut oil. There are no refined sugars in the recipe as it’s sweetened with maple syrup.

Stuff the pears when the filling is prepared, and bake for 30 minutes at 350 degrees. When finished, you have a healthy dessert as is. Step it up a notch by pairing it with ice cream (whole milk or dairy-free ice cream). These baked pears can also be eaten for breakfast or as a snack.

How to serve this fall dessert

I served this for my kids as an after-school snack. We paired up the stuffed pears with dairy-free coconut ice cream—sooo good if the pears are a little warm! If they were baked earlier, simply throw them in the toaster oven or microwave to warm them. Serving them with ice cream is optional, but oh-so-good. Another alternative is to add a dollop of nut butter on top for a more satiating dish. Whatever you top it with, make sure to add some of the leftover oat mix, too. 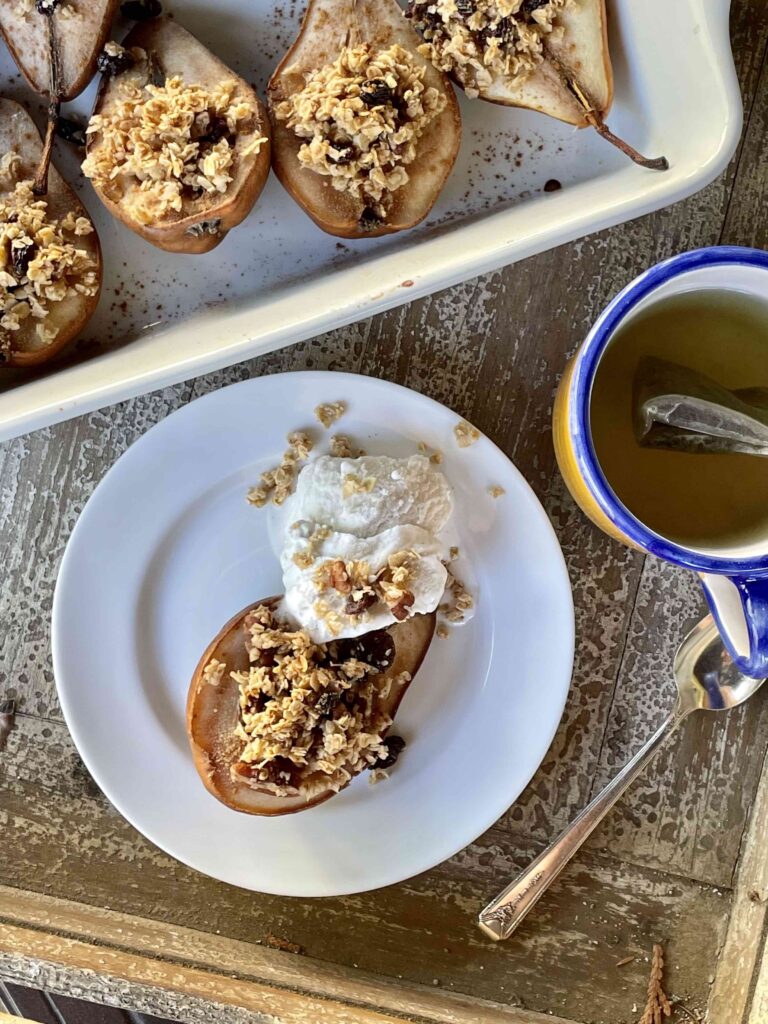 What type of pears should I use? The best pears for baking are going to be the ones with the thickest skin, so that they don’t fall apart when heated. I generally use organic green Bartlett pears or red pears. Both have held up well when heated. One note, I recommend buying organic since pears are on the 2021 Dirty Dozen list.

How do I get rid of the core? This is simple to do with a melon baller. Just one scoop of a ripe pear should to it! Feel free to remove stems or leave them. I personally think they look pretty left in. If you don’t have a melon baller, a spoon can also work.

How to store this healthy dessert? Save pears in the refrigerator in an airtight container for up to 4 days. Simply warm them prior to enjoying. 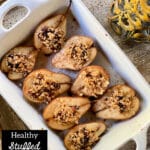 This Gluten Free Baked Pear Recipe is a healthy seasonal dessert, snack or breakfast! Never tried a stuffed baked pear? You're in for a treat. Oats, cinnamon, raisins and maple syrup are combined and stuffed into a pear that's heated to perfection. Serve it with or without ice cream.

These make the perfect healthy fall dessert and could make an appearance on Thanksgiving, too! Let me know if you make these—tag me at @easyrealfood if you do so that I can reshare!

Other Healthy Desserts that you may enjoy: 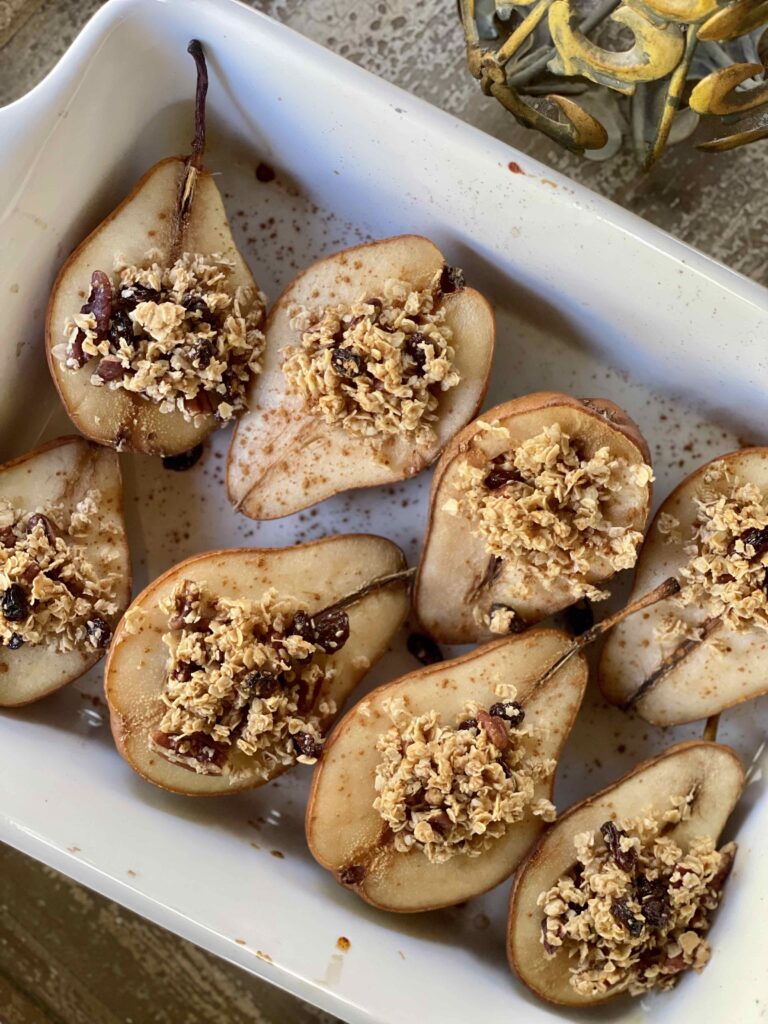