Can the AIP Diet Help You? 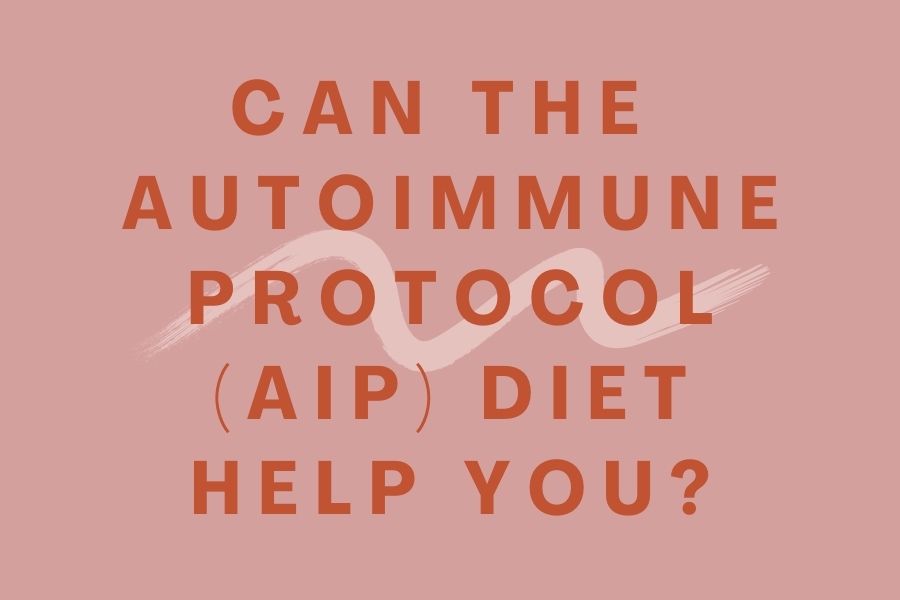 The AIP Diet (Autoimmune Protocol Diet) can be helpful for people with inflammatory diseases. It’s a strict elimination diet that, when followed correctly, can illustrate problematic foods and also reduce inflammation. Read about the benefits of AIP, the two phases, as well as what to eat and what to avoid on the AIP Diet. 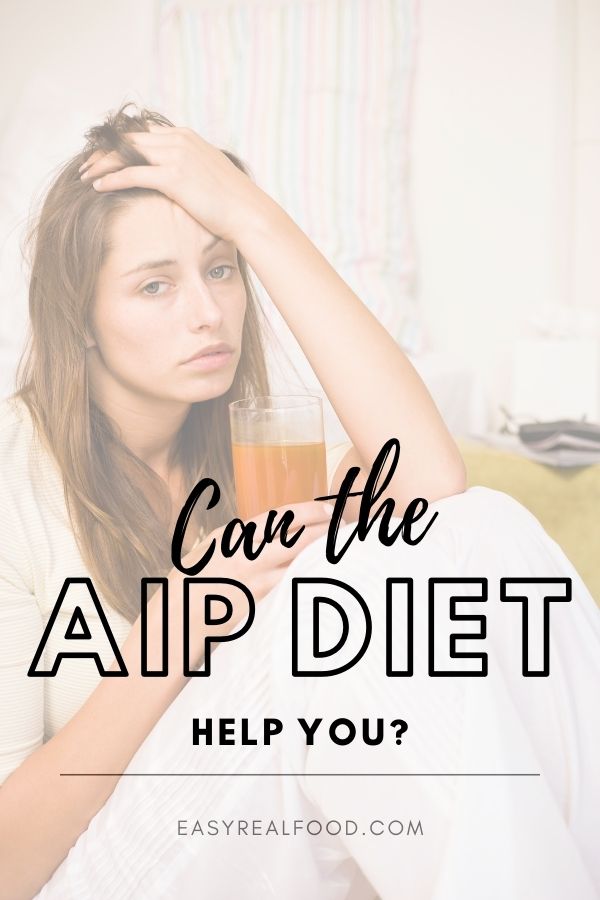 If you’ve dealt with any type of inflammatory disease (think diabetes, allergy, asthma, autoimmune diseases, celiac disease, hepatitis, inflammatory bowel disease, etc.), you may have heard that you should take a look at your diet. And yes, there is truth to this. In fact, at the heart of every major degenerative disease such as diabetes, cardiovascular disease, cancer and Alzheimer’s, is inflammation in our bodies caused by a poor diet.  For many people, particularly those dealing with autoimmune diseases or symptoms of autoimmune diseases, a diet called the Autoimmune Protocol has proved to be incredibly helpful and eye-opening.

So What is the AIP Diet?

The AIP Diet was created in 2011 by Loren Cordain, PhD, a scientist who discovered that certain foods can sometimes trigger inflammation in people with autoimmune disease. The idea behind it was that it could help those with diseases such as Crohn’s disease, rheumatoid arthritis, lupus, Hashimotos and even celiac disease. In addition, for those with autoimmune symptoms who may not have been diagnosed yet, trying the AIP diet can be helpful in trying to determine if foods are contributing symptoms and inflammation. It’s a type of an elimination diet, of sorts, and can definitely be helpful for many.

The AIP diet is stricter than Paleo. The basics include vegetables and clean, lean proteins, but the list is very stringent and needs to be followed closely to reap said benefits. At the end of the day, all of the processed foods, including refined oils, sugars and flours are removed from one’s intake and instead they are flooded with nutrient-dense foods.

If you have symptoms or a condition that has a basis of inflammation, trying the AIP diet can be one tactic to consider. It is important to note that while trying the AIP diet, it’s not only what’s on your plate that is of importance. Considerations must be given to lifestyle as well, including sleep, stress, exercise, and overall happiness, as these factors can also contribute to wellness.

Benefits of the AIP Diet 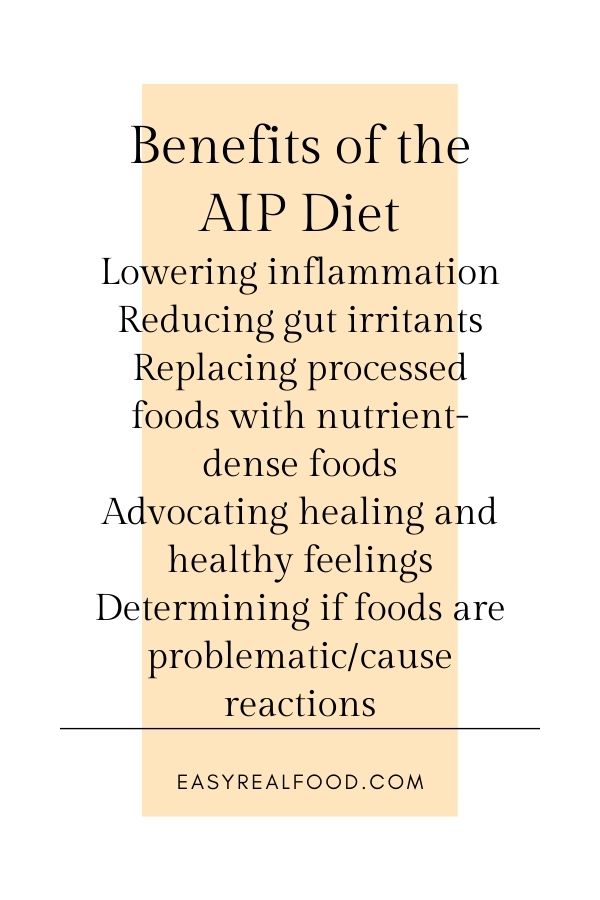 What to Eat on an AIP Diet

What to Avoid on an AIP Diet

Now that we’ve looked at foods that you can enjoy on the autoimmune protocol diet, it’s important to look at the foods that should be avoided. This list includes: 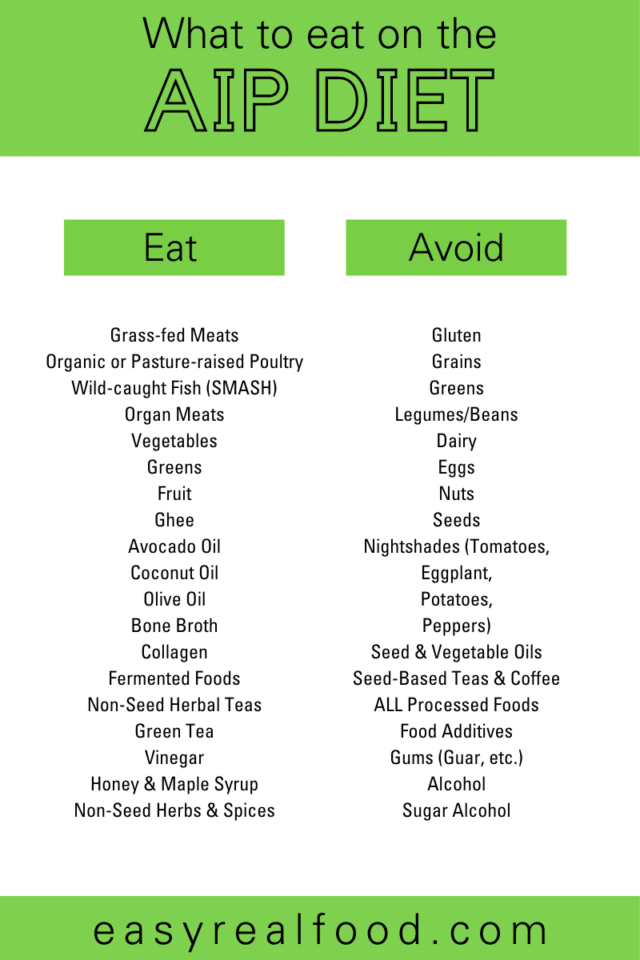 The Two Phases of AIP

The first phase of AIP

The first phase of the autoimmune protocol is elimination. The goal is to remove foods and medications that may be contributing to the inflammatory state of the body and to balance out bacteria in the gut as well.

During the time of removing potentially problematic foods, these are also replaced with nutrient-dense, fresh, minimally processed foods. Again, it’s important to note that focusing on positive lifestyle factors need not be ignored. Simply following the diet but not addressing stress and sleep may not yield the results one is looking for.

In addition to said foods above, coffee, alcohol, tobacco, sugars, some medications and all NSAID’s (ibuprofen, naproxen, high dose aspirin) must all also be avoided.

The second phase of AIP

The second phase of the AIP diet is the reintroduction phase. Once changes have been made, and foods have been out of the system for a while, individuals attempt to add some of the foods back in slowly, taking note of how they feel to assess tolerance levels.

It’s important to only add back one food at a time and to give 5-7 days in-between adding these back in to accurately assess whether they are bothersome or not. How do you know if they are bothersome? Noting symptoms and feelings, including digestive distress, sleep disturbances, headaches, energy levels and skin irritation can help determine if a food is not being tolerated well. Many find success in keeping a food journal to note these findings.

While adding a food back, a small amount is first included on day 1. If no symptoms appear, the same food is attempted the next day with a normal serving size. Wait 5 days after this day to determine if a reaction occurs

If foods are tolerated, they can be added back into the main diet. At this point, it is safe to move on and test another food

How long should people be on the AIP diet?

Referring back to the idea of bio-individuality, there is no “set time” for one to be on the AIP diet. That said, many people stay on it for 30-90 days but feel positive changes prior to the 30-day mark. It is not suggested that one remains on the diet for longer than a few months for fear that nutrient requirements and diversity of foods may not be met. For this reason, moving the reintroduction phase should not be skipped.

At the end of the day, this is an elimination diet and is restrictive. As noted above, nutrient deficiencies and lack of diversity may result. It also can be cumbersome in social settings and prove difficult to eat outside of the house. Adding stress is definitely not the goal for someone with autoimmune conditions, so if it becomes stressful, it may deem another look to determine if it’s actually worthwhile.

There are no guarantees that the AIP diet will work. While the goal is to reduce inflammation, however, one may unearth some problematic foods while working through this practice and ultimately feel better in the process.

One last note: autoimmune diseases cannot be cured but instead must be managed. Perhaps thinking of the AIP diet as a tool in management is a more realistic approach vs. assuming that the disease can go away as a result. It’s also important to note that having a health coach or medical personnel who is knowledgeable in this area can be most helpful in navigating the process.